Callout for Artist of the Month Submissions 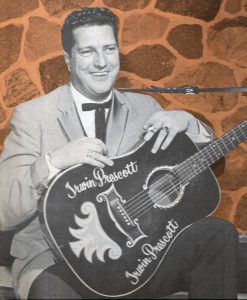 Irwin Prescott was calling square dances at age 9 and in his late teens, was heading up his own band, The Mell-O-Tones, and hosting his own radio show over CFCN radio in his hometown of North Bay, Ontario.

As a recording artist, Irwin Prescott released six albums on the Rodeo/Banff, London and Cheyenne labels, and released singles in the USA on Ambassador Records, while his Canadian releases were largely on the Melbourne Records label. Three of his singles earned national chart action, including his lively version of the Leroy Van Dyke classic “The Auctioneer”, which was a #1 hit in Canada for Prescott in 1966. His follow-up single the same year, “Chew Tobacco Rag”, reached #3 on the charts, while his 1967 single “Model T”, climbed to #2 on the national charts. All three singles were released in Canada on Melbourne Records. 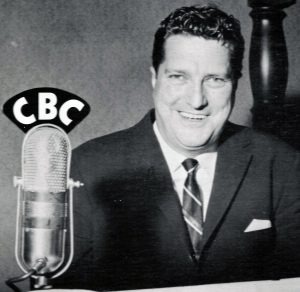 Irwin Prescott was recognized for promoting young Canadian talent, with his 1976 LP “Irwin Prescott & Friends” being a prime example. The package featured rising stars of the day including a then-16-year-old Anita Perras, who would go on to become one of Canada’s top female Country artists. The album also featured singer Peggy McCann performing the Irwin Prescott composition “Foolishness, Jealousy or Pride”, a song from which he also enjoyed heavy radio airplay in Canada and the USA.

Irwin Prescott was renowned as a showman on stage, often adding comedy and novelty skits to his stage show. After moving to Ottawa in the early 1970’s, he also brought his sons Randall and Ronald into his country group, “The Country Diggers”. He was the driving force in bringing “live” country entertainment to the Ottawa area when he opened and managed The Golden Rail Club in the Lafontaine Hotel. The honky tonk-styled club featured mainline Canadian country acts as well as touring Nashville artists. Prescott also owned and operated Hillbilly Haven, a smaller hotel establishment located in Cumberland, Ontario, near Ottawa. 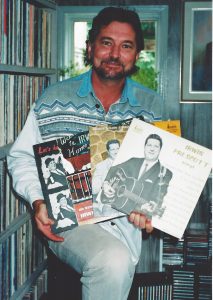 Irwin Prescott’s sons Randall and Ron both continued to pursue careers in country music after the untimely passing of their father on August 8, 1977. They formed The Prescott Brothers country/rock band, and Randall would go on to become a member of the famed Ottawa-based group Family Brown, which later evolved into Prescott-Brown. Randall married Tracey Brown and the couple operated a recording studio in Clayton, Ontario, with Randall earning accolades and awards for his production work, while Tracey continued to pursue her solo singing career. In recent years, Randall and Tracey Prescott’s children Kaylen and Kelly have pursued music careers, with Kelly Prescott attracting special attention with the song and video “Hillbilly Jewels”, a reflection of her family’s deep roots in country music.