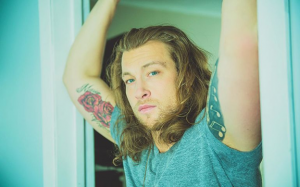 “Outlaws & Outsiders” started as simply a cool title for the cross-Canada tour Marks did with Aaron Pritchett five years ago. Canadian country radio is where the songwriter would love to land, but like the song’s title, he’s an outlier. His sound isn¹t poppy enough to fit the mainstream mold. “I feel like I’m a country artist, first and foremost,” he says. “I want to give country radio something different for the fans and for the genre.”

As “Outlaws & Outsiders” suggests, Marks writes songs filled with truths learned from his rural upbringing. Despite “Outlaws & Outsiders” reaching Top 10 on rock radio South of the border ­and peaking at No. 3 in Germany the songwriter is content to stay close to home. He lives in Sturgeon Falls (population 6,798), 39 km West, along the Trans-Canada Highway, from his hometown of North Bay.

Before the song’s global success, the journey to 25 million streams started in Las Vegas in the fall of 2015. Marks joined Kevin Churko at the eight-time JUNO nominee’s studio, The Hideout. The pair wrote the bones for “Outlaws and Outsiders” in less than a day. Churko then used his influence to land some heavy-hitter guests: veteran country music icon Travis Tritt, Ivan Moody of Five Finger Death Punch, and Mick Mars of Mötley Crüe.

With or without the support of Canadian country radio, Marks will stay true to the outlaws and outsiders who inspired him: from Hank Williams to Buck Owens, Willie to Waylon, and Steve Earle to Sturgill Simpson. His dad turned him on to these country legends, and he simultaneously discovered hard rock, becoming a fan of bands like Rush, Black Sabbath, Grand Funk Railroad, and Deep Purple.

“It’s unfortunate for artists like myself, with more of a rock edge, that we don’t often get the respect from the country establishment,” he says. “Country music needs change, and I want to be that change.” 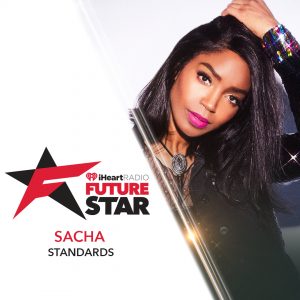 Canadian Country artist Sacha has been chosen as November & December’s iHeart Radio Future Star for her new single Standards. The track, which has been streamed over 350,000 times since release, is an upbeat tune, layered with feminist lyrics that outline the ‘standards’ for how to be treated in a relationship.

“I am absolutely over the moon about being chosen as iHeart Radio Future Star,” said Sacha. “I am so thankful for this opportunity and for Standards to be heard across Canada.”

The iHeart Radio Future Star program highlights up and coming talent from across the country every 8 weeks through Bell Media. Standards has also been added to all 13 Pure Country Radio Stations across Canada. Sacha was selected for the program to close out 2020 as her fresh sound continues to make waves across the country music landscape following the release of her debut EP The Best Thing this Summer.

Born in Montreal and now residing in the rolling, rural hills of Ontario, in the village of Warkworth, ON, the singer and her identical twin sister were raised on country music and country living, surrounded by a family of musicians. As a result Sacha learned how to play the guitar and develop her own unique, home-grown sound from a young age. As a black female Canadian country artist, Sacha has always pushed towards equal representation for people of colour to be embraced in life and the music industry and hopes as her career and platform grows she is able to continue to advocate for people of colour.

After being crowned “The Next Country Music Star” at the 2016 Havelock Jamboree, her career continued to grow following the release of her single “Good Times Going” in 2018. Since then, Sacha has performed alongside incredible Canadian artists including Dean Brody, Brett Kissel, Jess Moskaluke, Madeline Merlo, The Abrahams, and Terri Clark and played key shows including Boots and Hearts, Havelock Jamboree, Sound of Music Festival, CMAOntario Stages, and the Canadian National Exhibition. Sacha was recently welcome as a Radio Disney Country Artist, where Standards has been in rotation. 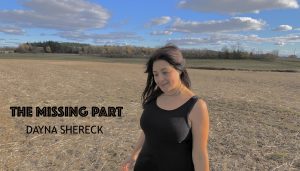 Co-writing the song with Dave Woods and Ray Walsh, Dayna believes “The Missing Part” “is appropriate to the times we are living through, as people are feeling lost and looking for something to make them feel connected. There is a lot of hope in this song: it is about reconnecting to what is important and finding ourselves again.”

Based in Toronto, Dayna took her songwriting passion to Nashville eight years ago and through her relationship as an unsigned writer with Dan Hodges Music, has nurtured a network of strong songwriting partners including Marcum Stewart, Carrie DeMaeyer and Juno, CCMA & OCMA award winning independent Canadian Country vocalist Jamie Warren.

Dayna’s songs have been included on several independent Country artists’ albums, she has been a 2012 & 2013 Semi-Finalist in the International Songwriting Competition, and a Finalist in 2014. In 2015 she had her first film placement with her song “Whadaya Say”, in the movie On The Wing, starring Shirley Jones.

In 2015, she released her debut EP, Suitcase Full of Dreams, followed by 2018’s Chasing The Moon and 2019’s Triggered. To date she has received airplay on CBC/SiriusXM, Cashbox Radio and Country stations across Europe, the United States and Canada. “The Missing Part” is her 5th single. 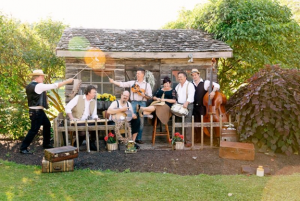 The Western Swing Authority, Canada’s leading Western Swing group released a new single and video, “This Old Bar”, Oct. 22. The video addresses the lack of places for people to hang out with friends or see their favourite bands, and was inspired by the Commercial Tavern in Maryhill, Ontario, where WSA first played together. To compile the video, WSA and its label, Curve Music, started sending messages to venues all over North America to see if they would be willing to send footage of their venues sitting and waiting with no bands and no people inside.  Many did send in pictures and videos, reinforcing the song’s poignant message. 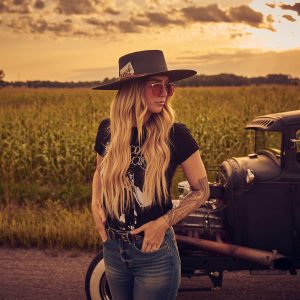 Building on the momentum of her warmly-received debut album, The Basement Sessions: What I’ve Learned So Far, and her recent nomination for Rising Star at the CMAOntario Awards, Ontario independent country artist Alli Walker is pleased to announce that recording is underway for her sophomore album, Brand New. This album will add to Alli’s “Conscious Country” and “Mindful Music” sound with a more commercial influence.

Just approved for the FACTOR Juried Sound Recording program, Alli will apply the funding towards the creation and release of the album. The project is being produced by Dave Cohen, who recently collaborated with Joey Moi to co-produce a pair of #1 singles for Dallas Smith (“Drop”) and Mackenzie Porter (“These Days”). 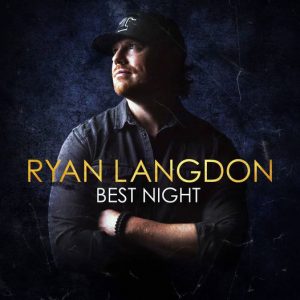 “Best Night” is the newest single from Ryan Langdon from his recently released debut EP, Lit in the Sticks.

Ryan Langdon plants his songwriting in authentic celebrations of real life. “When you smiled back at me, girl / That’s when I knew / You were the best night of my life,” he reminisces on “Best Night”, a sweet, romantic mid-tempo dedicated to his girlfriend and the first night they met. “Still can’t believe / That we talked to three / Shouting over everyone / Sure, we had some beer / But looking back, it’s clear / It was you giving me a buzz.”

Paige Rutledge Releases New Single “Take Me Back To Tiki” 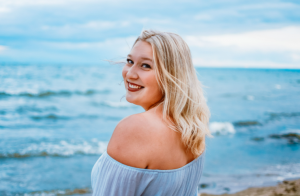 Oakville’s Paige Rutledge has released her brand new single – “Take Me Back To Tiki”.

Country music has always been a huge part of Paige’s life. Growing up listening to the classics, Paige found her love for country at a very young age. Growing up in Oakville, Ontario, 21-year-old Paige is an upcoming pop-country artist with a new, and unique sound in the music industry.

Paige first gained recognition in 2014, when she released her debut single “Someday.” She followed that up with her 2016, EP Hey Girl and won the artist showcase at Canada’s Largest Ribfest in Burlington in September 2019. She’s been recognized by the Country Music Association of Ontario as one to watch after playing events hosted by the organization – and she’s been making inroads into the industry since.

She’s starting out – but she’s set to make a big impact. 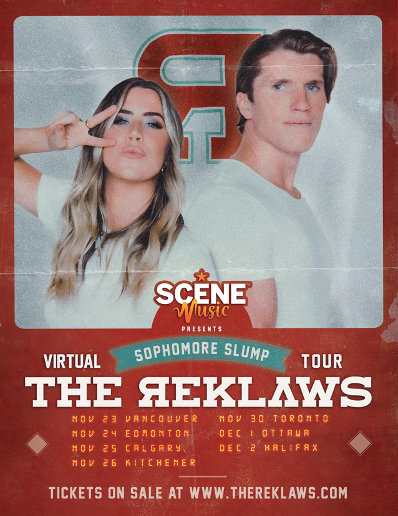 After releasing their highly anticipated album Sophomore Slump CMAOntario & CCMA winners and JUNO nominees, The Reklaws announce their digital tour. Presented by SCENE Music, the duo are set to embark on the “Sophomore Slump” virtual tour kicking off on November 23 in Vancouver, Canada. Tickets are available HERE and a full list of tour dates is below.

The digital tour will have shows in seven cities across the country, including a stop in the platinum selling country duo’s hometown of Kitchener, ON. Virtual concert goers will have the chance to hear The Reklaws perform tracks from their brand new album live for the first time ever including their latest single, “Not Gonna Not.” Viewers will also have the opportunity to take part in a Q&A and can expect special guests along the way. 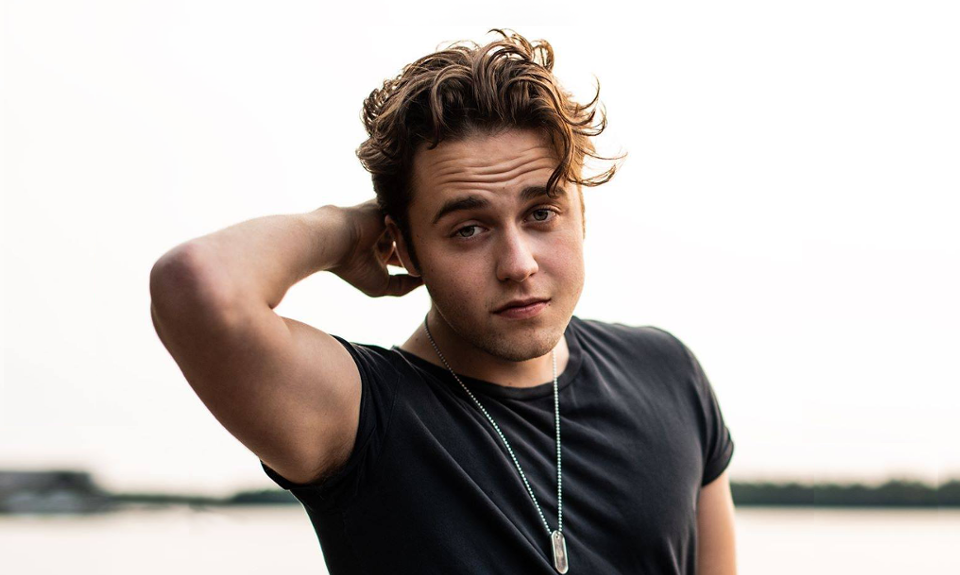