The Canadian Government Is Amending The Broadcasting Act The Minister of Canadian Heritage tabled Bill C-10 in Parliament November 3rd. This Bill, if approved by Parliament as currently written, would amend the Broadcasting Act in many ways that are beneficial to the music industry.

In short, defined online services, including music streaming services, would be obligated to contribute funding and promote Canadian cultural content. Government estimates this would generate funding over $800 million a year by 2023. This money would presumably be invested in Canada’s cultural industries, including music.

The new Broadcasting Act would also expand the authority of Canada’s broadcasting regulator, the Canadian Radio-television and Telecommunications Commission (CRTC), to include online video and music streaming services such as Netflix and Spotify.

Currently, such services (‘online undertakings’) that deliver audio and audio-visual content over the Internet are exempt from licensing and most other regulatory requirements. This means that unlike commercial radio stations, ‘online undertakings’ (i.e. streaming services like Spotify) are not required to make financial contributions towards Canadian Content Development (CCD) or have any promotion requirements. This will change if the new Act is approved.

The CCD dollars invested by commercial and ethnic radio broadcasters include important contributions to FACTOR or Musicaction and the Community Radio Fund of Canada (CRFC). 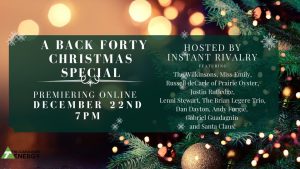 A Back Forty Christmas Special hosted by Instant Rivalry will be a virtual Christmas program featuring performances from award winning musicians such as Russell De Carle of Prairie Oyster, Miss Emily, Justin Rutledge, The Wilkinsons and even Santa Claus premiers online December 22nd.

Since the beginning of the COVID 19 pandemic, Back Forty Productions in partnership with Tri-Canadian Energy have been providing free musical programming through their one hundred percent solar powered recording studio in Prince Edward County. Programming that has reached a quarter million people globally so far.

Back Forty Productions is owned and operated by Caleb and Megan Hutton, best known as the award winning sibling duo, Instant Rivalry, are ecstatic to invite everyone virtually into their home and studio this holiday season.

“Back Forty Productions is built on the creative foundation of family and a love of music. With this Christmas special we have the opportunity to not only share that with the artists but the public as well.
Our Christmas gift will come directly from our studio to your home in the hope that it brings you joy this holiday season.” Caleb says. As a father of three, Caleb cherishes holiday family traditions and promises the program will be friendly for all ages.

When The Hutton’s first set out to make this show a reality they knew two things 1. That they wanted to provide it to the community for free and 2. It had to be bigger than anything they had created so far. And they are confident they have achieved just that.

“Viewers are going to see genuinely, intimate performances from both local and big acts. So much love and positivity has gone into this production, from choosing the artists to building the set.” Megan adds. “There will be humour, fun, lots of twinkle lights and some truly moving performances as well.”

This Christmas Special, set to premier online December 22nd at 7pm, will be free to the public to enjoy. In the days leading up to the premier, the audience is encouraged to submit their name on Back Forty’s Facebook page for a chance to win incredible prizes during their “ 12 Days of Giveaways” promotion. This promotion will feature amazing gift card bundles, a guitar, LED TV’s, a private concert and more. Giveaways commence December 11 , 7pm at www.facebook.com/backfortypro and will run until December 22nd.

The full musical line up includes: The Wilkinsons, Russell DeCarle, Miss Emily, The Wakami Wailers, Justin Rutledge, Lenni Stewart, The Brian Legere Trio, Dan Dayton, Andy Forgie, Gabriel Guadagnin, and of course Instant Rivalry. Tune into the premier of A Back Forty Christmas Special, December 22nd, 7pm at www.backfortypro.com . The program will also be available after it’s premier online and through radio on 99.3 County FM and Mix 97.

The Unison Benevolent Fund assistance program for the Canadian music industry is in the frontline when it comes to offering support for a sector that has been hard hit by the pandemic. A virtual concert has been announced for Thursday, December 17 at 8 pm EST. Billed as Canada In Unison Holiday Special: In Concert, it features a large and impressive cast.

On the bill (so far) are Iskwe + Tom Wilson, Jim Cuddy, July Talk, Matthew Good, members of Mother Mother, Neon Dreams, Ruth B., Sam Roberts Band, Sarah Harmer, Scott Helman, Tim Hicks, The Glorious Sons, and Tom Jackson. The virtual event includes elements of live along with newly pre-recorded performances and beyond the entertainment value, it is designed to draw attention to the increased demand and urgency to support the Canadian music industry during the lockdown as the need for support increases with so many music people out-of-work and in-need.

The Devastating Impact of COVID-19 on Canadian Independent Music Industry 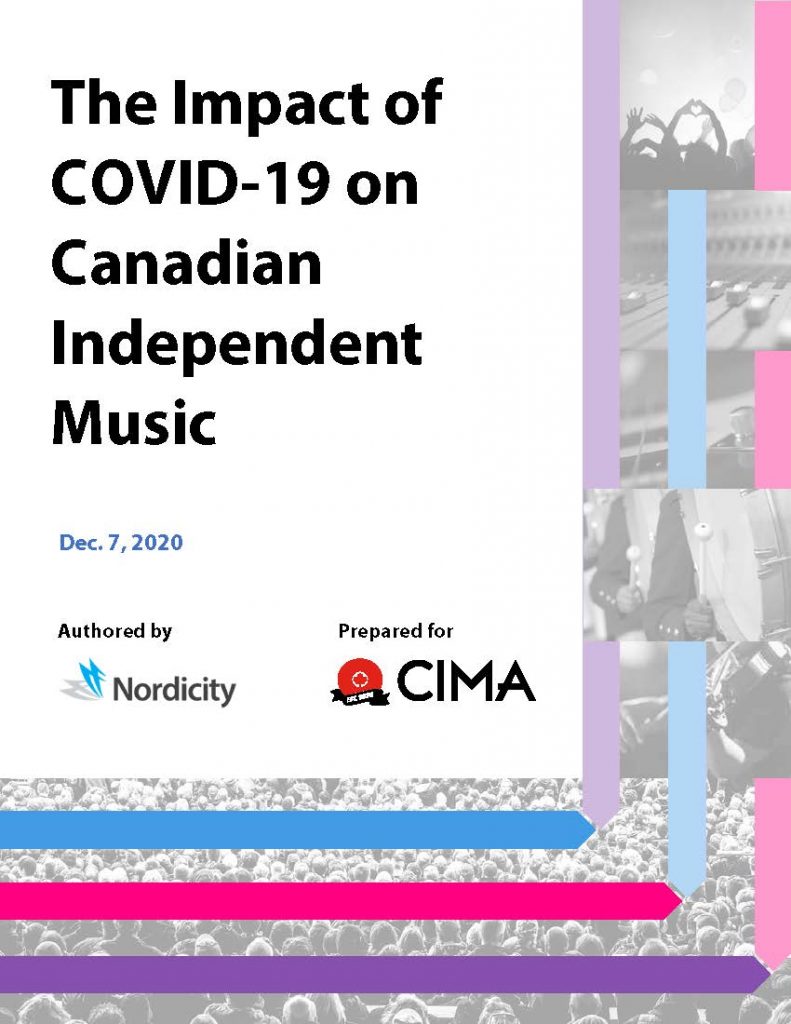 New Report: Some parts of the sector have lost up to 79% of revenue from 2019

Nordicity, on behalf of the Canadian Independent Music Association (CIMA), has released a report entitled: The Impact of COVID-19 on Canadian Independent Music. It shines a light on the various impacts of the COVID-19 pandemic on the Canadian independent music sector. Among the most shocking revelations: the evaporation of the live music scene has led to a decline in revenue of CAD $233 million in just six months and that the industry will likely not recover to pre-COVID levels until at least 2023.

The Good Ones, an album that offers 3 popular hit songs and a buzzing new track, proudly highlights the title track; a powerful duet with Quebec pop superstar Marie Mai that achieved top ten at country radio nationally. The initial offering from The Good Ones was another ‘good’ song, the energetic “Good Jeans”, taking the #2 spot at country radio last summer and attracting 3M plus streams to date.Tebey’s recent 3.5M+ streaming single “Happened on a Saturday Night”, also included on the album, is currently in the Top 10 at Canadian country radio. The track sees Tebey reflecting on weekends growing up and pulls you in with reminders of Saturday nights when life was simpler. On November 20th, “Shotgun Rider” was offered to fans on DSPs only, with very positive results and prominent playlisting. The stunning video directed by Sean Cartwright and shot by David Schuurman will be launched to the world with the support of Boots and Hearts Music Festival (where Tebey is performing summer 2021) social media on December 11th.The Good Ones album is a dynamic collection of crafty verses and catchy hooks which, along with his impressive repertoire and achievements, has earned Tebey a prominent name in contemporary country music.
(Source: Press Release) 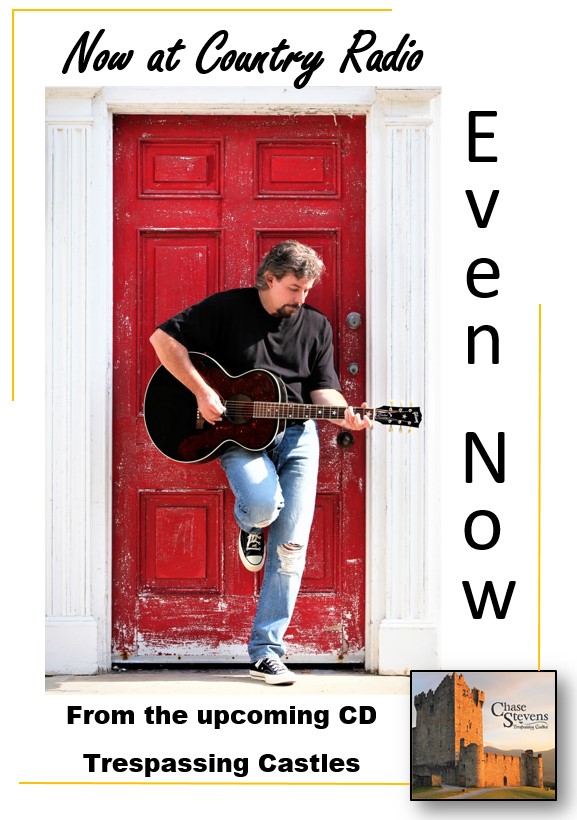 Toronto area singer songwriter Chase Stevens released his newest singe, “Even Now”, to Canadian Radio in November. The song is featured on his newest CD, Trespassing Castles, scheduled for release in early 2021. Chase has been active co-hosting a bi-monthly songwriter’s night in Oakville, showcasing some of the best emerging songwriters and performers in Ontario. He recently spearheaded an autographed guitar auction to raise funds in support of the Moonshine Café in Oakville. Chase collected signatures from 20 Ontario country artists, including David Boyd Janes, Kelsi Mayne, Nicole Rayy, Tianna Woods, and Jamie Warren. All of the funds raised from the sale of the guitar – more than $1100 – went towards saving the Moonshine Café from closing. 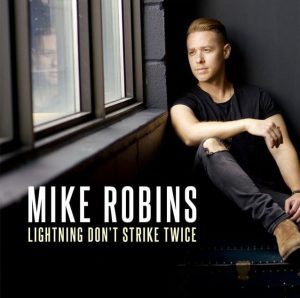 Award winning country music artist Mike Robins, released his new single “Lightning Don’t Strike Twice” October 2nd via all streaming services. The track is a return to form for Mike as he delivers a romantic song about feeling that once in a lifetime kind of love unlike anything else.

Mike exploded on the country music scene in 2013 with his group Autumn Hill, achieving radio success with multiple top 10 and 20 singles including “Anything At All,” “Mixtape,” and “Can’t Keep Waiting.”  The music video for the group’s hit single “Blame” also topped the CMT charts reaching #1. Following the success of Autumn Hill, Mike continued to grow working on a side project, East Adelaide.  As part of Autumn Hill, Mike has been nominated for 4 Canadian Country Music Awards, 2 JUNO Awards, and 5 Country Music Association of Ontario Awards, and won awards for the CMAOntario’s Rising Star and Best Group/Duo.

Now branching out on his own as a solo artist, the accomplished singer/songwriter/guitarist continues to grow and deliver. Often being compared to artists like John Mayer and Keith Urban, Mike’s new music showcases his soulful smooth vocals, raw emotion, and electrifying guitar work. Mike’s songs continue to be deeply rooted in country music’s long tradition of storytelling. “Lighting Don’t Strike Twice” is already creating quite a buzz within the industry.  Armed with new music, there is no denying that the best is yet to come from Mike Robins.