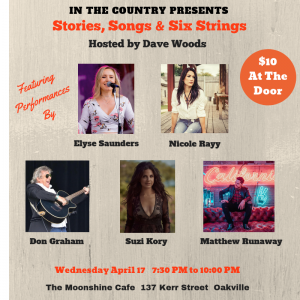 Dave Woods has been hosting a songwriters series at The Moonshine Cafe in Oakville since last year. The next date is coming up on April 17th featuring performances by: Elyse Saunders, Nicole Rayy, Don Graham, Suzi Kory and Matthew Runaway. Admission is $10 at the door. 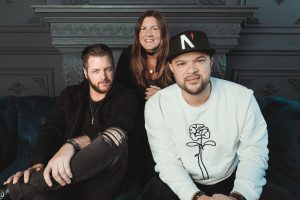 Jayward Artist Group was announced as a Canadian-based management company and independent record label owned and led by label/management veteran Jill Snell and award-winning, chart topping, writer, artist and producer, Tebey.  Jayward Artist Group will be a multi-genre company that will be distributed by The Orchard worldwide and promoted in Canada by Sony Music Canada. The roster will initially consist of co-owner Tebey and newcomer Matt Lang, with plans to expand the roster within the first year of business. Though Jayward is a new venture, the combined careers of its two principals over the course of the past 20 years has shown a steadfast commitment to reputable practices, integrity and creative excellence.

This spring, Charlie will be joining George Canyon and Doc Walker for the Hit After Hit Tour, which will see the three acts traveling across Canada. Charlie will also be releasing another single to radio in April called “All Of Your Love,” featuring Candace Latina. After concluding the Hit After Hit Tour, Charlie has a full summer of festivals ahead, joining country royalty on stage, including Brooks & Dunn, Alabama, Toby Keith and Billy Ray Cyrus.

Danny Sylvestre’s Sing Out for CHEO Event a Great Success 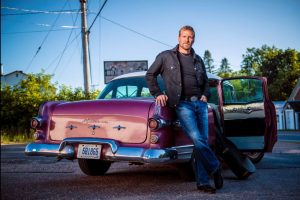 Danny Sylvestre, a singer/songwriter from the Outaouais region, and founder and organizer of the Sing Out for CHEO fundraising event, is proud to announce that the event was a great success. A large crowd was on hand at the Lone Star Loft in Ottawa, where participants competed for door prizes, silent auction items, an autographed Senators jersey and a $1,000 travel voucher donated by VIA Rail. Danny is giving back to the Children’s Hospital of Eastern Ontario (CHEO) through his music, for all the care and support provided to his daughter, who has muscular dystrophy. The Sing Out for CHEO team is now gearing up for the fourth edition of the event, which will be on Saturday, February 22, 2020. In addition to his busy festival performance schedule, Danny is working on a new album for 2020.

Doc Yates Back In The Studio 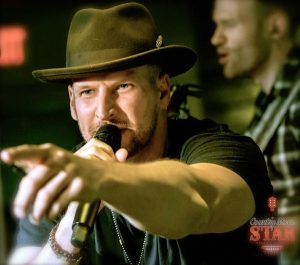 Doc Yates is excited to announce that he is back in the studio with award-winning producer, Jason Barry. This will be Doc’s first EP, which is set to be released this year. All songs were written by Doc Yates, with Jason Barry providing the majority of the instrumentation on the record. And if he wasn’t busy enough, The Rising Star Concert Series kicks off with its opening show on April 13 in Belleville. Created by Doc Yates, the series promotes up-and-coming Canadian country artists while raising money for local charities.