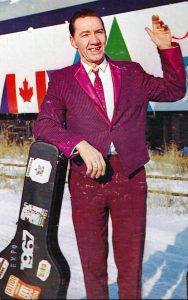 The early years of Canadian country music were largely dominated by national heroes Wilf Carter and Hank Snow… but, flying under the radar at that time was the equally talented Hank Lariviere, who was influenced heavily by the songs and recordings of Carter and Snow as well as Jimmie Rodgers and Hank Williams.

Henry Lariviere was born January 23, 1917, in Hawkesbury, Ontario, with the family relocating to Ottawa when he was still a youngster. By his pre-teen years, Henry was playing guitar and singing the songs made famous by his idols. At the outbreak of WW II, Henry found himself in Montreal waiting for a troop train to Halifax… on a whim, he walked into the RCA Studios in downtown Montreal, asking for a chance to record some of his songs. RCA legend Hugh Joseph admired the raw talent he had just met and immediately produced and recorded four songs — The Northern Cannonball, Hurrah For Camp Borden, I Long For Old Alberta and Soldier’s Farewell. The songs were released by RCA on 78 rpm singles, reportedly becoming best-sellers in the years preceding any kind of radio hit charting.

In 1939, Henry Lariviere enlisted in the Canadian Army, assigned to the Prince of Wales Regiment. Unfortunately, he was injured during his stay with the regiment and when released from hospital, was transferred to the Royal Canadian Ordinance Corps. During his stay in the Armed Forces and while in hospital, Henry would entertain his fellow soldiers with his guitar, playing and singing his songs. He was soon dubbed “The Singing Soldier”. 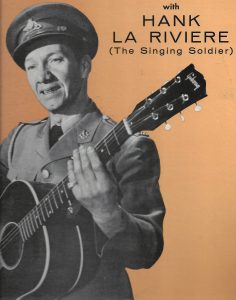 By the late 1940’s, Henry Lariviere was playing hotel lounges in Eastern Ontario and Western Quebec and was called upon to perform as an opening attraction on a Canadian tour featuring his idol, and now friend, Wilf Carter. In the years that followed, Henry would also perform on Canadian TV shows and as a special guest for touring Nashville stars Hawkshaw Hawkins, Gene Autry and most notably, opening shows in Kingston and Ottawa for the immortal Hank Williams in May 1951.

In 1948, Henry became a regular on the Cammie Howard & His Western Five radio show, which was aired nationally, twice weekly, on CBC Radio. His exposure on radio attracted a national fan base, which would encourage Henry to further pursue his solo recording career.

In the early 1960’s, after his early career stay with RCA Victor and subsequent releases on the Gavotte label, Henry Lariviere signed on with Rodeo/Banff Records, releasing four albums for the label, where he was now formally billed as “Hank Lariviere”. One of the albums, A Salute To The Gallant Men, featured several of Hank’s original wartime-flavoured songs, as well as tunes composed by Johnny Cash, Elton Britt, and by fellow Canucks Hank Snow and Paul Anka (The Longest Day). 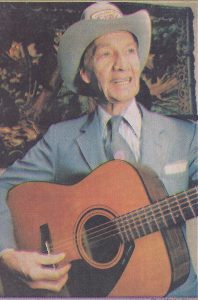 By the late 1960’s, Henry had become popularly billed on record and for his touring shows as “Hank Rivers”. He released the album Something Old, Something New on the RCA Camden label and followed that success with his career highlight album, Hank’s Centennial Travels. The album, produced by long-time friend and Hall of Famer Ted Daigle, featured songs that related to all Canadian provinces and included the signature tune, Hank’s Travels.

In addition to recordings of his own original songs, Hank “Rivers” Lariviere was also a prolific songwriter, with numerous songs recorded by other artists, including such Canadian classics as The Travelling Snowman (a tribute to his idol Hank Snow), recorded by Orval Prophet; and Maple Sugar Sweetheart – a lyrical re-working of the Ward Allen fiddle favourite, recorded by Canadian legends Bob King and Jack Kingston, as well as by Nashville stars Mac Wiseman, Doc Williams and Ramblin’ Lou. Also recording Hank Rivers Lariviere compositions were such notables as Family Brown, Ted Daigle, Bob King, The Rhythm Pals and Doug Bell. 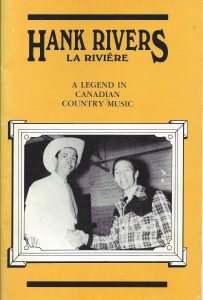 One of Hank Rivers’ final trips into the recording studio came in the mid-1980’s, when he lent his vocal support (together with the inimitable Sneezy Waters) on the song For You My Love (My Canada), a patriotic tune written by Paul Henry Dallaire and featured on Dallaire’s Passive Canadian album. Hank’s musical legacy was also recognized with inclusion of his recording Goodbye Mary Dear, on the album The First Ten Years, issued in 2001 by the Ottawa Valley Country Music Hall of Fame.

Through the years, Hank Rivers’ extensive career and significance to the Canadian country music scene has been widely recognized. In 1987, a 30-page booklet: Hank Rivers Lariviere – A Legend In Canadian Country Music, chronicling his career in text and vintage photos, was published; he was also featured as “the 5 of Diamonds” in a collectible deck of playing cards; and in the early 1970’s, the City of Ottawa dedicated a street name (Hank Rivers Drive) in his honour. In 2014, the British Archives of Country Music paid homage to Hank’s music career with the release of a 28-song CD, containing re-issues of his RCA and Rodeo/Banff recordings.