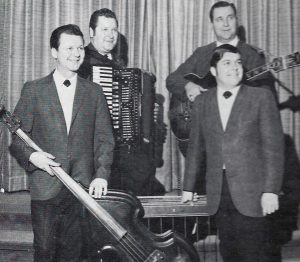 Al Brisco’s tasty steel guitar work has been featured on countless albums recorded by many of Canada’s top country recording acts. You can hear his stylish “steelin’” on albums by such notables as Ian Tyson, Tommy Hunter, George Hamilton IV, The Good Brothers, The Cooper Brothers, Gary Buck, Smiley Bates, Gordie Tapp, Sylvia Tyson, Wayne Rostad, Joe Firth, Artie MacLaren, Johnny Burke… and the list goes on and on; with not the least being his steel guitar contribution to the Dick Damron classic, “Countryfied.”

Perhaps one of Al Brisco’s more illustrious appearances on a recording goes back to 1972, when he was called upon to add his steel work on the Pure Prairie League album “Bustin’ Out”, recorded at RCA Studios in Toronto. Pure Prairie League were among the seminal country/rock bands that emerged in the 1970’s, and two of the songs on the album, “Amie” and “Fallin’ In and Out of Love”, would become all-time favourites with fans and fellow country/rock groups. 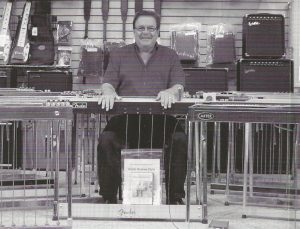 Al Brisco was born January 20, 1945, in Northcote, Ontario – a tiny community near Renfrew in the Ottawa Valley. His mother first steered Al towards an interest in music with piano lessons… but it wasn’t long before he discovered the magic sounds of a steel guitar. By the early 1960s, Al had built his own steel guitar (using the photo from a Lloyd Green album as a guide) and he began playing the instrument as a member of the Renfrew-based group, The Countrymen. His early influences included such masters of the steel guitar as Ralph Mooney, Buddy Emmons, Lloyd Green and Tom Brumley.

By the early 1970s, after his mentoring years with The Countrymen, Al Brisco became a much sought-after steel guitarist, working in such touringbands as Sons Of The Saddle (headed up by The Siebert Brothers), Gary Buck’s band “Loose Change” and The Honey West Show; and then, spending four years as a member of Ronnie Hawkins & The Hawks – a gig that allowed him the opportunity to play behind such heavyweights as The Band, Kris Kristofferson, Frank Zappa, etc. In 1976, Al returned to his country roots as a featured member of the award-winning Canadian band Johnny Burke & Eastwind. Al’s steel guitar work was an integral part of the band’s #1 hit “Wild Honey.” 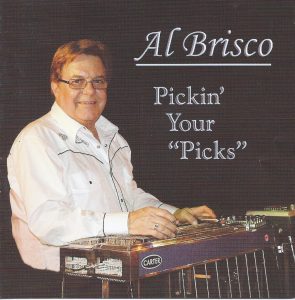 In the early 1980’s, Al Brisco took a respite from road work and spent a number of years as a key part of the Cosmo Music Warehouse operation in Richmond Hill, Ontario; and created The Steel Guitar Club of Canada (now Steel Guitars of Canada), which has since become the “first call” for established and newcomers to the world of steel guitars. Al Brisco has also designed his own brand of steel guitar, with many of the instruments sold to steel players around the world.

In 1994, Al Brisco recorded his first solo steel guitar album, “Pickin’ Up the Dust”, which featured a mix of his own instrumental compositions and cover versions of popular hits of the day. His 2007 follow-up album, “Pickin’ Your Picks”, was another masterful collection of his steel guitar interpretations of country and pop classics. Al’s work has also been featured on the “Northern Steel” CD series: a virtual “who’s who” of recordings by Canadian steel guitar players.

Al Brisco was inducted into the Ottawa Valley Country Music Hall of Fame in 1994.