Artist of the Month: Jessica Sole

CARAS has announced that 2022 JUNO Award submissions are now open through to Nov. 5. To be considered for nomination, national music release dates must fall between the eligibility period of Sept. 1, 2020 and Nov. 5, 2021. Details and submissions are available at junosubmissions.ca.

CARAS are also accepting applications from those wanting to become a judge for the Awards. Apply here before Nov. 19. 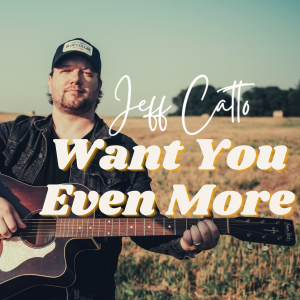 Jeff Catto is returning to his roots with a new brand of wholesome, high energy and heartfelt set of songs. Originally from Owen Sound, Ontario, this dynamic artist now calls the beautiful community of Woodstock home. Catto delivers an infectious blend of singer-songwriter pop/rock country that has been compared to and influenced by notable artists such as, Dierks Bentley, Niko Moon, and Jason Aldean.

His new release, “Want You Even More”, is out now at radio and all digital platforms. It’s a pull to the heartstrings. “Want You Even More” was inspired by Catto’s wife Brooke. Written by Catto and Johnathan Turner, this song expresses that even after years of marriage, that the feeling of excitement and lust still exists – and you want them to know that, and that every day you can’t help but want them even more. Recorded at Wallsdown Studios in Owen Sound and produced by GI Holm, with instrumentation by GI Holm, Paul Chapman and Ariel Delgado, “Want You Even More” is part of a six song EP expected later this Fall, Songs for My Wife.

Leading with six artist category nominations in 2021 are the PLATINUM-selling brother-sister duo from Ontario, The Reklaws.

Other nominees from Ontario include:

Congratulations to all of the nominees!

The International Songwriting Competition (ISC) recently announced the launch of a new Spotlight Award that will be given annually to a song and its songwriter(s) from a different country. The goal is to shine the spotlight on songwriting talent each year and honor their musical achievements.

The inaugural award, presented by ISC and SOCAN, will be presented to a Canadian song and its songwriter(s) who embody excellence in the craft of songwriting. All Canadians who are members of SOCAN are eligible for this award. This award is in addition to all other winners honored in the overall ISC competition.

The winner will be selected by ISC and will be awarded a prize package consisting of studio recording time at the renowned Dark Horse Recording in Franklin, TN, USA, one-week lodging at SOCAN Nashville House, and a travel grant from the SOCAN Foundation.

Now in its 20th year, ISC was created to recognize great songwriters and to provide a valuable platform to be heard by the music industry and the public alike. The competition is open to both professional and amateur songwriters. Renowned for its prestigious judges, the 2021 panel includes iconic artists Coldplay, Hozier, George Thorogood, Bebe Rexha, Tom Waits, Christian Scott, Linkin Park, Jeremiah Fraites (The Lumineers), Trevor Daniels, Metro Boomin, Kristian Bush (Sugarland), Niko Moon, Arturo Sandoval, Laura Pausini, NEEDTOBREATHE, and many more. Also included are record label executives from many of the top major and indie record labels.

For general information and entry forms, go to: www.songwritingcompetition.com.